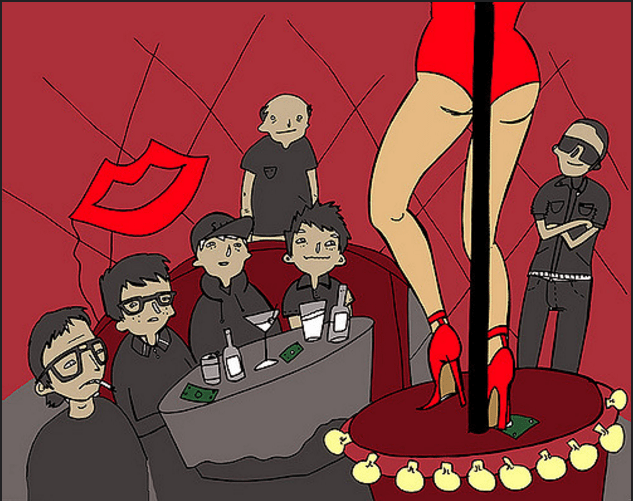 Today, let’s take a fun-loving jaunt through a few of the customer types we dancers encounter in a typical evening!

Test administrator: Tests may involve toothpick geometry, cryptograms, Sphinx-like riddles. He has an MBA or occasionally a PhD to substantiate his paternalistic authoritarian tone. After determining you to be of moderate intelligence, in the tone of a high school principal presiding over a bad kid at a conduct conference he tells you: you could do something better with your life.

Power-reverser: An enigmatic mix of yuppie and darkness in a black suit: the maybe-villain of a David Lynch film. He provides you with a script; instructs you to study the script; returns hours later to enact the script—a script in which you demean him: calling him worthless, a loser, a nobody, you defame him. “Why are you here, you fucking loser, you don’t even like pussy!” But oh he does; he does like it. He likes his pussy paired with degradation.

Middle-aged molester: Wears loose pants—how dare he!—jogging pants, windbreaker pants, cotton pants. Despite the strategic fashions, he spends vast money in the club that his Wal-Mart wardrobe belies. His bald head beading sweat, the lenses on his thick glasses nearly fogged opaque with amused arousal, he whispers innuendoes so dank and perverse that you expect your encounter to end with his presentation of candy as a lure into his windowless van.

You dunno whash you’re mithin’: It’s late. He’s young. He’s just drunk enough to want more to drink and recent years of teenage porn addiction drive a frightful hunger: student loans didn’t cover his appetite, not in any way, not tonight, and now he wants to eat for free. Most of his life he’s had it all for free. He can only imagine that you’re incorrect—that you are wrong, ignorant—that you are too dumb to give yourself to him, for nothing but his gaze in exchange, for nothing. When we both know, after all, that your attention costs a crisp twenty.