Behind the scenes of my latest photoshoot 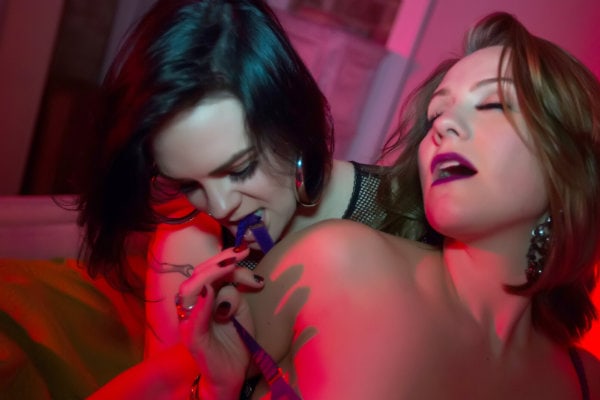 I can’t even tell you half of what happened on the shoot. A girl’s gotta keep some secrets, especially when they’re this delicious.

A fevered 30 hours in Houston, a night with no sleep. A multimillion-dollar loft, the downtown skyline our backdrop, two women, one insane connection. Expensive lingerie, an expert camera crew, an all-nighter that left everyone spent.

Artistic vision meets spontaneous chemistry. This story–is a true one.

Who is she? I won’t tell you her name–although, if you know me well, you probably already know.

I love to teach, to preach, to travel; however, it’s important to me that I continue to produce dope-ass art that stays relevant. Sometime in 2015, I heard a song by Bruce Springsteen called “I’m on Fire.” I grew up with this song, but never paid it much attention until last year. This song haunted me, and told such a dark, sensual love story. I wanted to tell that story from a female perspective, from one woman to another. I wanted to produce a music video of this song reworked by a female vocalist–with some trippy, dreamy beats behind her.

Enter CLAVVS–an Atlanta-based band composed of four-time Grammy-winning producer Graham Marsh and singer/songwriter Amber Renee. I shared my vision for this film + music project with Amber and Graham last year, and within a few weeks, they produced a gorgeous minimalistic cover of “I’m On Fire.” I sat with this cover for a year, dancing to it often in my Stripcraft workshops while on tour.

Once I finished touring, completed the Spellbook, and finally hosted my first big retreat, I knew exactly where I wanted to dedicate my energy: producing this film.

After shooting a few projects with Imaging Studios Boudoir (my 2015 showreel and my movement tutorials for The Stripcraft Spellbook), I knew exactly who to hire for this project.

At that time, I was also conceptualizing a workshop sequel to Stripcraft, one that focused on seduction and connection. The more I thought about these two projects–the workshop and the film–the more they seemed intertwined, telling the same story–and the more my landscape of my imagination was taken up with daydreams, these images, these feelings.

If you’re reading this, there’s a good chance you’ve taken my original Stripcraftworkshop, and if you’e taken it, then you know: Stripcraft is about so much more than stripping off your clothes–it’s about stripping down your walls, opening your heart and mind, and choosing to love the fullness of yourself in an environment of loving support and rolicking good times.

Intimacy. Authenticity. No tricks necessary. Let your eyes be windows; let your heart be open. Enjoy being seen. Enjoy making another person feel seen. Feel it in your bones. Connect.

Look for the “I’m on Fire” video release sometime next month!

Interested in booking Stripcraft: Pure Lapdance…or any of my workshops? I will be touring Australia and New Zealand in April 2017, the UK and Europe in June 2017, and the USA and Canada in July 2017. Email me at lux@luxatlpole.com!

A wild night awaited us….

all photos by Imaging Studios Boudoir