The Monster Is Inside: On Rape Culture And Toxic Masculinity 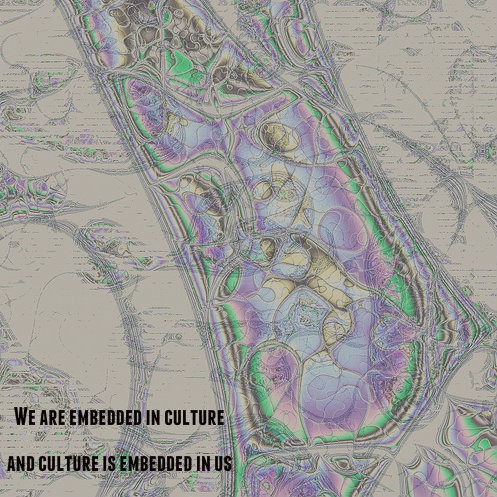 It is human nature to tell stories of heroes and villains. And in these stories, usually the teller emerges as the hero. I am the Good Guy, we tell ourselves–and others. Perhaps I’ve done wrong, but I’ve always had some reason for it, some cause, some mitigating factor–right?

I’m good–right? Now that motherfucker over there? He’s bad.

And thus history is written.

Even we we are aware of this tendency, we may still find it a difficult one to escape. That which we recognize and condemn in others, we remain blind to in ourselves. The unassailable, horrifying messiness of life is easier when we can divide the world neatly: good and bad, woke and unwoke, on my side exactly, or an enemy to my very humanity.

And so when we talk about polarizing topics like rape culture, even the most self-aware of us often fall into the habit of casting good guys and bad guys. We hunt the monsters; we feel satisfied that we have slain another dragon. We imagine there is an end somewhere to dragons. The bad guys are decreasing in numbers with every monster that falls, we imagine, never understanding:

The monster is inside us, too.

We are embedded in culture, and culture is embedded in us, each of us a microcosmic fractal of the macrocosm.

The other day, I asked my Facebook friends the following query: 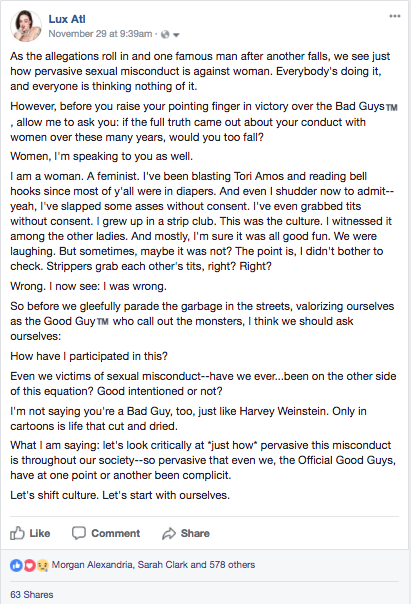 Among dozens of other friends responding with confessions of complicity, my friend Lucy added her perspective.

Lucy is a trans woman. During the time period of the story she shared, Lucy was male-presenting and understood by the world as a boy. Although what she felt inside did not correlate with the way the world understood her identity, nonetheless at this time this young person, like most young people, wanted to fit in with the other kids. In the following tale, we get a unique insight on rape culture and toxic masculinity from the almost-infiltrative perspective of a young girl misunderstood by the world as a boy and socialized into masculinity despite her desires.

Lucy is a trans woman. During the time period of the story she shared, Lucy was male-presenting and understood by the world as a boy. Although what she felt inside did not correlate with the way the world understood her identity, nonetheless at this time this young person, like most young people, wanted to fit in with the other kids. In the following tale, we get a unique insight on rape culture and toxic masculinity from the almost-infiltrative perspective of a young girl misunderstood by the world as a boy and socialized into masculinity despite her desires.

“This [discussion of sexual misconduct] reminds me of an experience I had in middle school,” Lucy writes, “an experience for which I simultaneously feel incredible regret and gratitude. I grew up presenting as male, but I was really bad at it and got picked on a lot as a kid.

“This one night I was at a middle school dance and a group of guys had been harassing some girls, taking turns bumping into them and grabbing their butts. The guys started pressuring me to do the same. They picked a girl and told me to go grab her butt. When I said no, they called me a fag, a sissy, a pussy until I gave in and agreed.

“I remember the weight of dread as I walked across the dimly lit linoleum floor in the musky rec center event hall toward a girl, until a year ago had been my friend, but now, thanks to the gender-divided social structure of South Georgia middle schoolers, had become an object in a rite of passage I wanted no part of. As I brushed past her, I tried to graze her butt as lightly as possible while still satisfying my peers. As fate would have it, them boys chose the wrong bitch for that trifling shit.

“The moment I touched her this chick spun on her heel and punched me full in the face as hard as she could. I remember thinking, ‘well, yeah, that’s about right’ as I stared, terrified into her unflinching face. Peals of laughter erupted from the boys watching from across the room, and I promptly ran out of the building to go cry in the shadows.

Looking back on this moment, I’m so grateful for the strength and confidence of that girl, for the lesson she taught me, and for the compassion she showed me later, when I apologized to her for what I’d done.”

I’d like to highlight a few parts of this narrative to illustrate what Lucy’s story can reveal about how rape culture and toxic masculinity is a cultural problem, not an individual one. Because gender matters to the story, when referring to parts of the story in which Lucy was being actively socialized as a boy, I will refer to her as “a boy” for clarity.

There’s more to say, but I’ll stop there.

What’s the point of all this deconstruction, Lux? What are you trying to convey?

What I want you to understand is this: even a young trans girl who does not comfortably identify with masculinity–when read by the world as masculine, nonetheless gets subjected to cultural rites of masculine initiation. In this story, we see one child who is uneasy with this initiation. However, completing this process successfully, responding to the challenges issued successfully, remains compulsory for this child to experience a sense of acceptance among peers. Can we blame a child for wanting this acceptance? Hell, can we blame an adult? In this way, the culture embeds itself into our deepest desires, at times demanding cruel acts to fulfill our human longings. Who hasn’t been guilty?

So what, Lux? Are you making excuses for rapists? Who gives a shit about any of this theoretical deconstruction of rape culture and toxic masculinity? What do I do now?

I am not making excuses for rapists. I am, however, encouraging you to view the epidemic of rape as a result of a culture in which we all participate, not the wild and distant domain of a few thousand madmen.

I am encouraging you to examine the ways in which you have been complicit in order to gain basic needs and emotional fulfillment. This is not an exercise in self-flagellation, but rather one an exercise in perspective, context, empathy. Understand that no such easy delineations as Good Guy or Bad Guy exist, no matter how intoxicating and comforting these illusions may be. Know that to effect cultural change, we must first understand the culture we wish to change, our place within that culture, and that culture’s place within us.

Want to think harder about this stuff? Join my bookclub, which I’ll be launching in February. Sign up here to be first in line for details!